For Business Buyers and Sellers, Tribeca is a Maturing Economy

For Business Buyers and Sellers, Tribeca is a Maturing Economy

If you’re interested working with a business broker to buy or sell a business in New York, a step you may find worth your while is to understand the economic climate of the specific neighborhood or the business in question. Our New York Business Insights section is dedicated specifically to helping you understand the environment in the various regions of New York City.

The Business Environment in 10013 (Tribeca)

Looking at the most recently available tax returns from the IRS (2017), we see that there were 15,140 filed from the 10013 zipcode, giving it more filed tax returns than 89.86% of the New York City zip codes we’re observing. By New York City standards, this is not a particularly elderly area; on a proportional basis, just 11% of zip codes in New York City have a higher percentage of its residents in the 65+ age bracket. In terms of trends, about 18% of residents list a mortgage on their tax return, and this amount appears to be growing at a rate of 0.15% per year. For context, that’s a higher growth rate than about 70% of zip codes in New York City.

Here’s a chart summarizing the key demographic attributes of 10013: 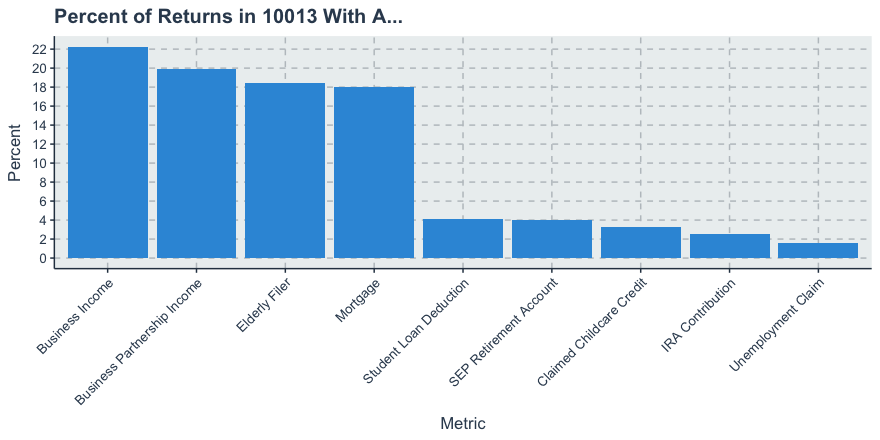 Have additional questions on buying or selling a business in 10013? We’ll be happy to help you as best as we can. Just drop us a line.

Read More
It’s Time to Exit. Are you Ready?Previous Post
Business Activity Shows Some Signs of Decline, But Incomes Remain Solid in the Meatpacking DistrictNext Post