What’s it Like for Small Businesses in 10009? (East Village)

What’s it Like for Small Businesses in 10009? (East Village)

The Business Landscape in 10009

In terms of the specific industries that are growing in 10009, Caterers is one that seems to fit that bill. It now has about 7 establishments in the zip code, and has been growing at about 6.96% per year. For those interested in riding trends, that may be something to watch.

First, it should be noted that this is one of the most populous zip codes in New York, as it reports more IRS filings than 99% of other zip codes in the city. As such, if your business thrives on a locally dense population, 10009 may be an interesting geography for you. On a proportional basis, this zip code is wealthy enough to have a sizable percentage of its population saving for retirement: the proportion of IRS returns from 10009 with an individual retirement account (IRA) contribution is greater than that reported by over 90% of IRS returns. But while 10009 is good, relatively speaking, at saving for retirement, this population does not have the attributes typically associated with homeownership; specifically, 80% of zip codes in New York City have more individuals with mortgages than 10009 has. If this fact can be extrapolated to suggest the population of homeowners is relatively low, that may be an interesting point to consider for businesses that are sensitive to the degree of transience in its local population.

Here’s a chart summarizing the key demographic attributes of 10009: 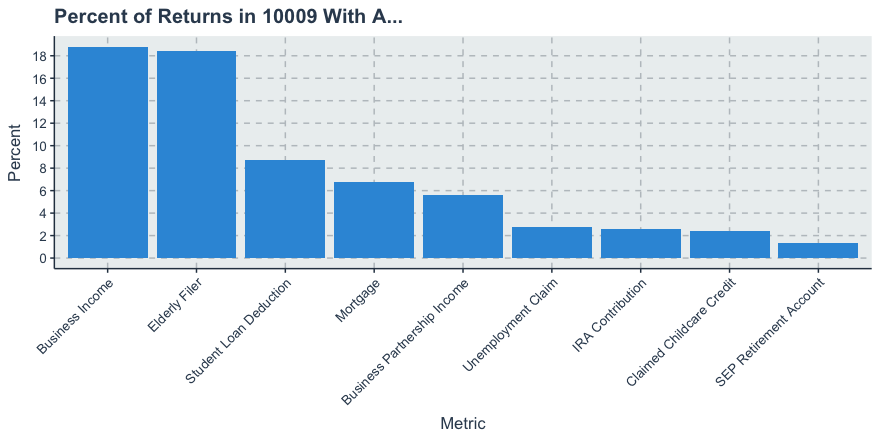 Have additional questions on buying or selling a business in 10009? We’ll be happy to help you as best as we can. Just drop us a line.